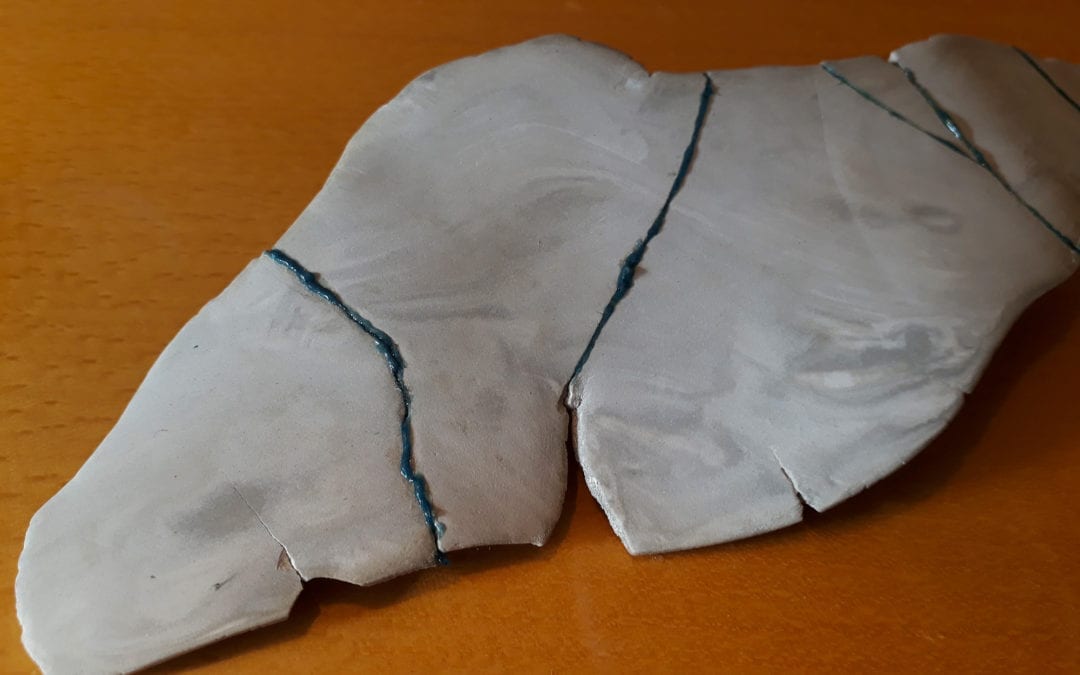 There was a moment when a piece was waiting for its second firing but instead, was broken into several pieces. In that instant when I stared at the piece while inwardly observing the fragility of the material, the vulnerability of my process and time spent on making became magnified, everything then zoomed outward to our entire environment and the fine balance that it currently hangs in. Showing the repair of this seems significant. How oft does something break down or become broken and immediately is destined for the trash? Decommissioned in its ‘youth’, it is no longer cost-effective or even time effective to actually fix things, so how is it with the world we live in? Doesn’t our golden thread to survival deserve some dedicated sacrificial time and mending?

In George Monbiot’s article on pathological consumption, he writes that “while researching her film The Story of Stuff, Anne Leonard discovered that of the materials flowing through the consumer economy, only 1% remain in use six months after sale. Even the goods we might have expected to hold on to are soon condemned to destruction through either planned obsolescence (breaking quickly) or perceived obsolescence (becoming unfashionable)”.

Is the act of repair not a powerful catalyst for change?

Ben noted that the loss of my father is feeding into my project. He asked me, how do you think someone might read the pieces that you have made so far? Surveying them, I concluded that one might interpret them from quite a personal aspect. From his previous observations that they could be pieces of armor, I can see they could be symbols of battles won and lost in life. Repaired, the ‘wounds’ are reconstructed, highlighted even, from something detrimental or destructive into something (I deem) beautiful. Survival.
We are the sum of our parts, the uncomfortable parts as well as the triumphs. I would go so far as to say the grit and the grind is the gold and what really makes up a large part of who we are. 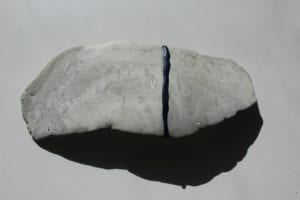 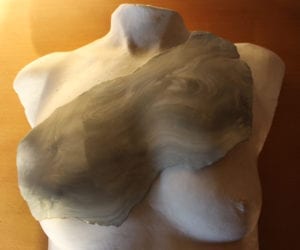 He agreed with my observation and added that the environmental aspect is secondary to what seems to be more about personal histories and I may have to reframe my question or alter what I am currently making (depending on how they are exhibited).
But I’m thinking though of the ‘personal’ history specifically present day, of our Earth…how can I record her story through my eyes? And how can the destruction of our environment not be taken personally? How do I connect to viewers if not through a personal means?

He pointed out the ambiguity of an earlier piece that looked more like joined bone and brought to my attention Christoph Zellweger’s work on internal body pieces as opposed to the external with some of mine. He also added that as the environment is deeper than the skin, maybe looking into the internal could be more relevant and interesting. An important remark! 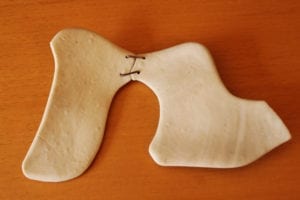 Ben also added that as these forms are molded around a female body (some more obvious than others), at this stage female brutality could also be read into them. Especially where the repairs made have been deliberately untidy or conspicuous.
While processing these observations musing how can I as a woman commenting on the sustainability of life systems make these present forms, which are in a raw manner echoing the curves in wind patterns being molded on a human (female) form while trying to pose the question ‘how do we as humans wear the responsibility of our actions upon our environment?’ And then become androgynous as to not somehow bring an aspect of femininity into it? Is not (mother) earth our true mother and the prime example of the feminine living through all of us and the abuse of the environment not actually be the ultimate form of female brutality? Although an extremely important issue, while I work in this style how can I draw on my (woman’s) sensitivity, empathy and duty as a (wo)man currently walking this earth who is concerned about its future, without having my work primarily being interpreted as possibly a commentary on violence against women?