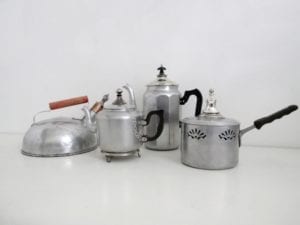 This weekend I realised that I was losing sight of what I was doing and removed all the extraneous bits and pieces from the desk.  What a difference it made – I could suddenly see there were three distinct groups of pieces and the task of editing and consolidating became much easier. I’ve also realised that I don’t think I talked about what all the making is for – it is a show at Avid a great gallery in Wellington (http://www.avidgallery.co.nz/)

I’ve also finally decided on a title – Confabulations – in thinking of this word I associated it with the general meaning of getting together for a chat and I liked the idea that the materials themselves were getting together and having a conversation – almost an exchange of ideas about the connotations of the silver plate and the aluminium kitchenware.  However when I looked the word up a further usage was listed:   confabulation (verb: confabulate) is a disturbance of memory, defined as the production of fabricated, distorted, or misinterpreted memories about oneself or the world, without the conscious intention to deceive (Fotopoulou A.; Conway M. A.; Solms M. (2007). “Confabulation: Motivated reality monitoring”. Neuropsychologia. 45 (10): 2180–90.)

This word is used in psychiatry and is seen in patients with some forms of dementia and other brain abnormalities.  The way the pieces are fabricated seems to have elements of a convincing reality, but are in fact a complete fiction.