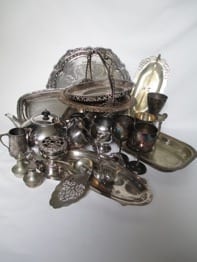 I have a number of collections but at the moment I’m focusing on two.  I have been working with (and collecting) silver plate since 2013 – its perceived value, meaning and use has changed, particularly during the last half century.  Developing ways of examining this history, both personally and in the wider community has been interesting and has resulted in some unexpected directions.

The collection of early 20th century aluminium and tin kitchenware is more recent.  The familiarity of these everyday objects, used so frequently but with scant thought to form or materiality, now interest me in a similar way.  Aluminium, valued for it’s lightness and inexpensive…is now tainted with the mistaken belief that exposure to aluminium can cause Alzheimer’s Dementia.

The items in these collections are usually labelled vintage and on the negative side could be thought of as having the connotation of sentimentality.  I believe they carry with them the potential to evoke memories of place, people and occasion but in a more bittersweet way.  The one speaks more loudly to the sense of occasion, the other to the aesthetic of the everyday.

Now is the time to test what happens when elements of these two collections are brought together. 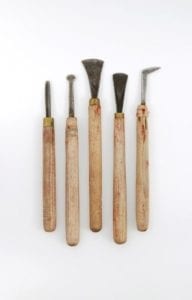 and touches on ideas of aspiration and exclusivity, aristocracy and middle-class, tea and tax.  Silver-service still evokes the elegance of starched linen, candlelight and crystal as well as the rich shine of the silver.  But today’s domestic high holidays are more likely to be celebrated around the barbeque than at a tea-table with porcelain cups and saucers and the rare foray from the china cabinet of the silver-plated tea service. 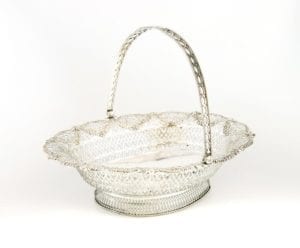 This object is a cake basket made from Old Sheffield Plate. It was made in Sheffield by Matthew Fenton & Co, around 1780. Old Sheffield Plate was developed in Sheffield around 1742 by Thomas Boulsolver. It is a type of silver plated metal made by fusing a thin layer of silver onto a copper ingot. It was rolled out into sheets and used to make decorative objects that looked like silver but were much cheaper. Cake baskets were used to serve small cakes at breakfast or afternoon tea. Contemporary recipes tell us that cakes were flavoured with a large range of ingredients at this time including plums, currants, nutmeg, almond and aniseed. The taking of tea is traditionally associated with women in the 1700s and 1800s. At the time this cake basket was made, tea was usually served after dinner in the home. After eating, the hostess and female guests would retire to the drawing room for tea and the men would stay in the dining room to drink alcohol. Tea was a very sociable occasion and was an opportunity to catch up on gossip and scandal. Manufacturers in the city often copied the patterns of silver objects in Old Sheffield Plate. However, objects made from Old Sheffield Plate cost around a third of the price of those made from solid silver. They proved to be very popular within the rapidly expanding middle classes, which were aspiring to replicate the styles and dining practices of the very wealthy. A vast range of different designs for cake baskets was produced in Old Sheffield Plate during the late 1700s, suggesting they were popular with consumers. A range of similar cake baskets are illustrated in a catalogue of the Sheffield firm, Dixon & Son, which dates to around 1823. In this catalogue the baskets cost between 90 and 105 shillings each, so were still an expensive item. Find out more… Discover more about cooking and eating in the 1700s: Lehmann, G. 2003 The British Housewife. Cookery Books, Cooking and Society in Eighteenth-Century Britain. Devon: Prospect Books. Day Book, Matthew Fenton & Company 1777-1795, Bradbury Collection Ref. BR1, Sheffield Archives. 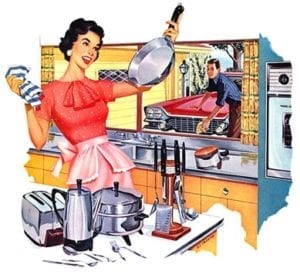