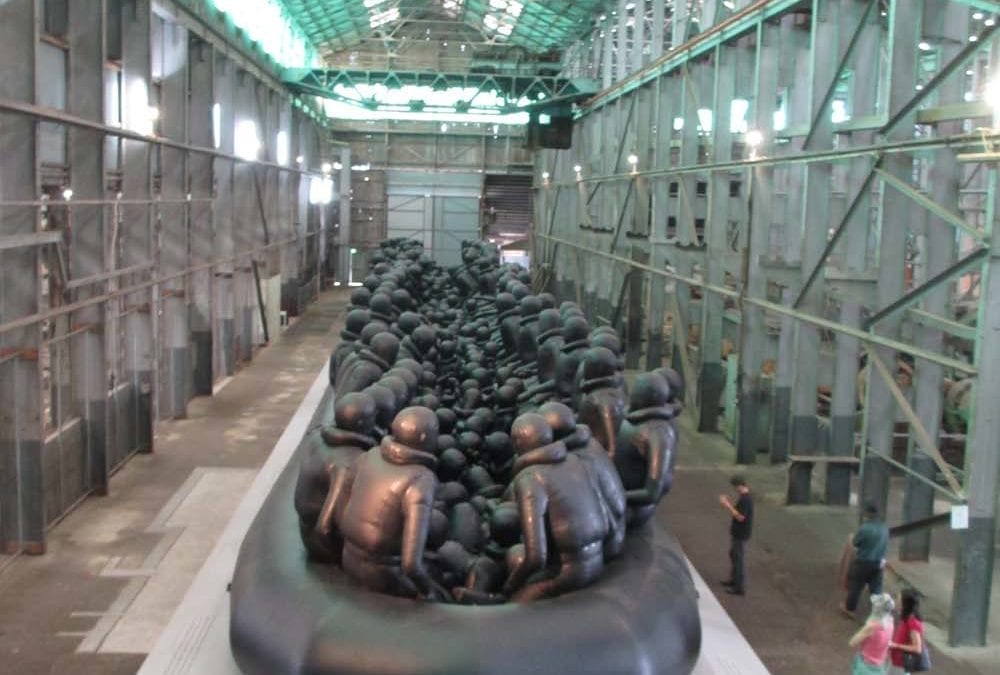 The trip to Sydnay marked the culmination of a work that has been in progress since December 1st 2017.  The R Matrix was made in response to the theme of the current Sydney Biennale, Superposition, a complex theory drawn from quantum mechanics. 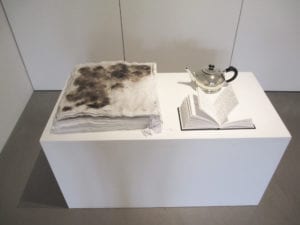 The R matrix is the probability per unit of time for the particle to make the transition from x to y.

This performance work was begun on December 1st and most days since then an unused vintage teapot has been cleaned.

As an artist not a highly trained physicist, I have understood the concept of Superposition in a non-scientific and simplistic way.  Working with vintage silver-plated objects over some years I have acquired domestic ware with many surfaces –tarnish, dust and grime, nicotine, patchy and worn to the base metal from repeated polishing.  These objects carry potent histories and are the starting point for ideas about the changes that occur over time that underpin this work.

Superposition references the shifting and layering on a sub-atomic scale.  Artist’s works shift and layer in a similar way, but on a human scale.

The work was to be shown at Stanley Street Gallery.  I’ve been cleaning a silver-plated teapot since December. A separate cloth for every day that I polish it and the final cleaning took place on the opening night.  By that time there was an accumulation of 100 cloths, a diary with entries that documented the weight of the teapot, the price of silver (in New Zealand) each day, the time I spent cleaning and what I was thinking about while I was working.  The weight of the teapot went from 511.26 grams down to 507.88 grams – so that weight of silver was all that was on the teapot – after all that cleaning there is very little of the plating left.  The show had a mix of HandShake 3 and 4 people and it seemed to me to be a very good exhibition.

It was good to have a bit of a break, though trying to get around all the exhibitions on for the Biennale was quite tiring and it was rather warm.  I think the funding cuts to this event were evident with fewer artworks and not that many memorable works. Of course, the Ai Wei Wei work, Law of the Journey, 2017 (the featured image for this blog) was powerful and thought-provoking.  A massive inflatable raft full of people and possessions all made from the raft material matched the scale of the industrial space on Cockatoo Island where it was shown.  Interestingly it was the work by Suzanne Lacy that moved me most.  The Circle and The Square, 2016 was a community singing project working with people from the closed textile mills of Lancashire.  The vocal style was based on shape-note singing and Sufi chanting and brought me to tears.