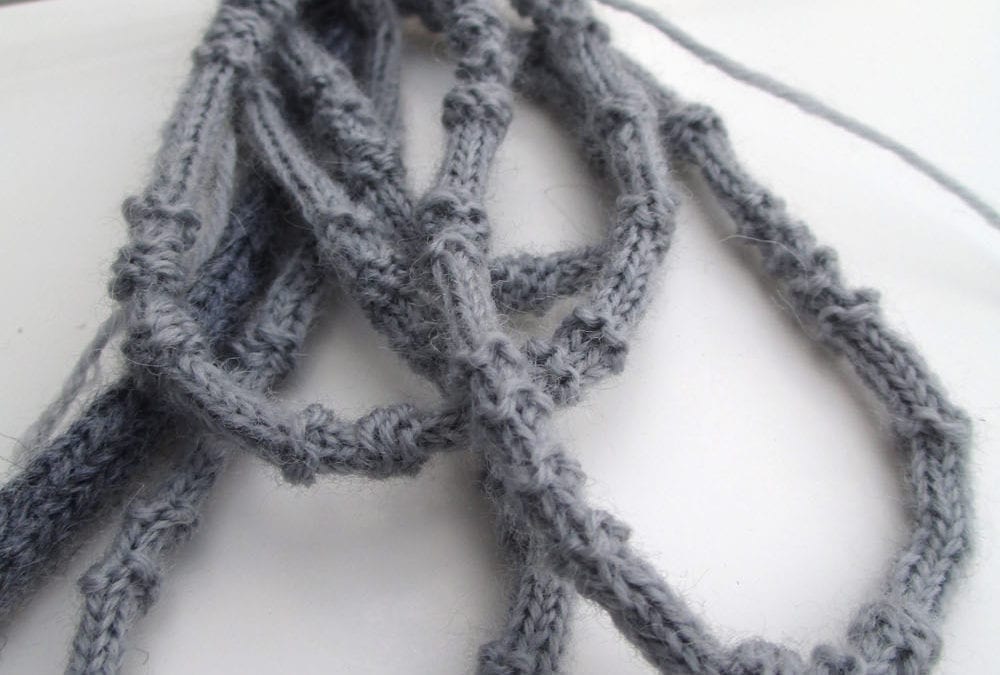 Looking at the use of knitting in relation to war has revealed some other really interesting connections.  I have to thank my son for the first discovery – he was listening to a history podcast in the background and caught the words knitting and espionage.  Strange bedfellows indeed, but knitting offers a number of opportunities for using code, either in the knitted garment, the yarn itself or the written pattern (which is already a form of code and the posting of patterns was banned during the war because of the opportunity for information to be concealed in them).  At that time, knitting was ubiquitous and the women occupied with it invisible. There are a number of women who have used aspects knitting to pass on information including Madam Levengle, Phyllis Latour Doyle, Elizabeth Bentley and Molly “Old Mom” Rinker, the latter during the Revolutionary War. The Belgian Resistance was known to have recruited knitters to collect intelligence about troop and train movements. 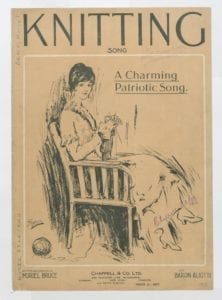 The cover of the sheet music. (https://ww1.sl.nsw.gov.au/stories/woollen-comforts-home)

The other discovery is that a number of songs were written about knitting – we have lost touch with the wonderful sense of ‘togetherness’ having a good old sing-along gathered around the piano brings.  At difficult times this building of the sense of community and the support that these occassions offered must have been very important for morale.  I’ve been able to access the music for one of the songs, Knitting Song, words and music by Muriel Bruce and Baron Aliotti published in Melbourne in 1915 and have been trying to learning to both play and sing it.  Unfortunately it goes a bit high for my voice, so it is definitely not for public performance!  But the words are both troubling and poignant. If you are interested you can listen to the song on this website: https://soundcloud.com/migration-museum/knitting-song-mix-3-best-one.

Even the titles are interesting:

I Wonder Who’s Knitting For Me? (Raymond Leveen and Jesse Winne)

This research has led to my (rather late in the day) deciding to respond to a second of Lam de Wolf’s works, (Halssierad, vrm 02607).  Her necklace is made from what appears to be a long cord, looped multiple times to her chosen length and, as with the wall work, bunches of coloured (blue and green in this instance) fabric strips attached.  I’ve continued with the knitting, reducing the scale of the ‘tube’ to only 5 stitches and knitting with three instead of four needles to firstly make a base cord and then explore how some kind of code can be incorporated into the knitting.  Since I was working (or at least trying to work) with a way of bringing the Knitting Song into this project the words were very much on my mind.  Of course, when I think of code, I immediately think of Morse Code and so I found the alphabet online, copied it and then transcribed the chorus of the song into code and began knitting.  One round of purl made the dot and three rows the dash.  Three rows of plain made the gaps between the components of each letter and eight between each individual letter.  I knitted fourteen rows to separate the words.  It is quite fiddly and needs much more concentration than I had expected.  I’ve made just over 31/2   metres from the words of the song and am working on a second cord that holds words that commemorate those that knitted during times of war.  I had intended to keep this work to just grey wool, but reflecting on the words of the song …knitting with the khaki wool and grey…I’ve started the base cord again in khaki.