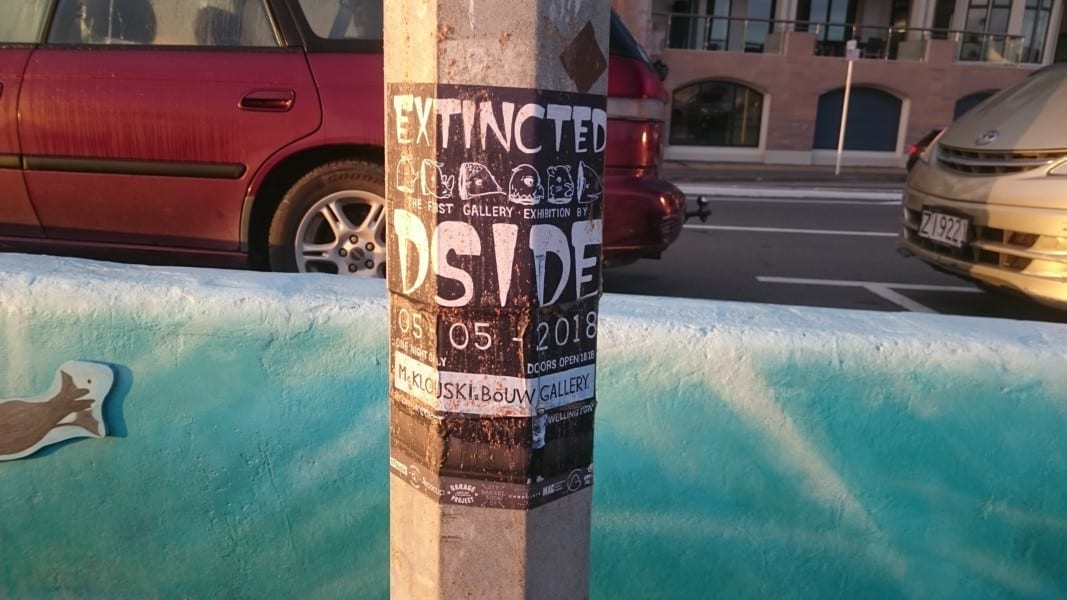 On Saturday night, Dave and I went to this show. Dave had seen a poster and we knew we both admired the artist’s work, having seen it adorn the streets of Wellington since we first moved here in 2007. Being the middle-class, middle-aged sticklers for promptness that we are, we were the first in the queue outside the closed gallery door and soon realised that we becoming part of something quite special, as the queue built behind us. The door was being manned by the artist’s dad and we had a great chat with him and with the next in line, the very amiable Jah, proprietor of Street Prints

When the doors opened we found this space two floors up with canvases painted in Dside’s distinctive style, all making a commentary on both extinct and threatened-with-exinction animal species. Dave and I had a couple of drinks and decided we wanted to buy one (alcohol definitely greases the wallet!). Having ascertained that there wouldn’t be anyone organising purchases until 20:20pm, we went for dinner and mused over whether we had a big enough wall space for the painting we were interested in.

..DSIDE EXTINCTED. . Thankyou to all the people who were there on Saturday night, was a massive crowd, @_dside's first Exhibition and there was a line down the road before opening, massive respect Wellington. . Also a critical thanks to @zoeyradfordscott the main advisor, and to @stickyfilth, @lisasarahscott, and @shivermanloose, for the support and setup. . To @sharkweeksolutions/ @sharkweekstore, @grza_ for the build and space. . To @garthbadger for documenting and being a welcome part of the whole project, and huge to Greg, @g0nz0__, @thom_mcelroy @nzkevincart for your important and well executed part on the night. Also @nz_art_show for the recent summer Artist in Residence Studio, and extra wine. And @babybeachboy, @madielean for running the Bar. . The Sponsors, @thisisstolen, @thieverystudio, @ecowarepackaging, @montanacolorsnz, @garageproject, @wellingtonchocolatefactory, @sixbarrelsodaco, @milarky, GraphicActivity, MacAccess. . This project happened because a lot of people helped with a lot of effort, thankyou all.

When we got back to the gallery, Dave walked in and said ‘the canvas is too big’, having not intitially registered what I said next, ‘He’s painted over the paintings’. Then he too realised that all the works in the exhibition had been painted over with matt grey paint. Apparently about half and hour before we got back to the gallery, a team of people had come in and erased the images with paint, completely ‘extincting’ the originals.

Dave and I were stunned. We felt simultaneously foolish, duped and in awe. The premise of the show, on for one night only [for obvious reasons it transpired] was so simple and elegant and powerful, I felt extremely privileged to have witnessed it. I’m still processing the personal effects of this show and will hopefully manage to wrestle them into some kind of significant context with time.