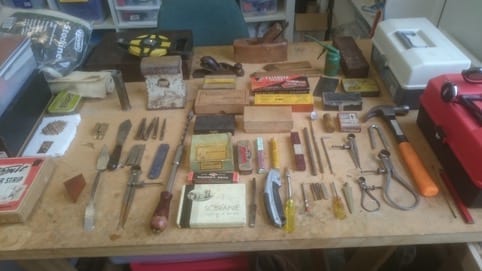 My father Jack died last year in April on the day of his 55th wedding anniversary. Jack inherited a whole load of tools from his father, Thomas William Stevenson who was an electrician in the South Island of NZ. Over the holiday period just gone, my sister and I helped my mother to sell up the house where my father died and move back to her home town of Christchurch. In the process I became the custodian of Tom’s tools, details of which can be seen in the following photographs.

My grandfather, ‘Grandpop’, died in 1973 after he had been living with us for a few years in London where I grew up. His major legacy to me was teaching me to read and every morning, apparently, my mum would hear me get out of bed and thud up the corridor to Grandpop’s room, book in hand, climb into bed with him, prod him awake and order him to ‘Read!’. By the time I was four years old I could read independently and haven’t really stopped since.

These tools are also a link to my father, who like many parents from relatively humble beginnings, had ambitions for his children to do ‘better’ than he did. It was a family joke that out of his three children he had planned for a doctor, an accountant and a lawyer and what he actually got was two teachers and a freelance image researcher/jeweller. However it was through jewellery that an unexpected bond was formed between us as I got increasingly interested in and covetous of tools, a lifelong passion of Jack’s, which he in turn had inherited from Tom.

These tools are currently laid out on a table in my studio waiting for me to use them. I’m taking my time deciding what various roles they are individually going to assume but in the meantime it’s very comforting to have them there, as stoic guardians of my practice. 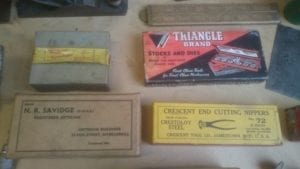 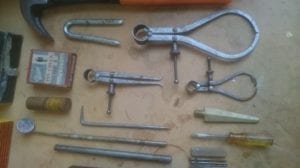 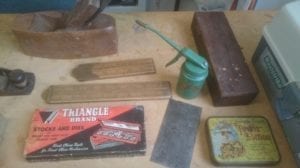 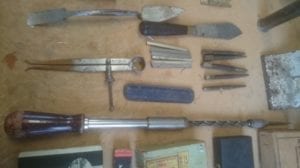