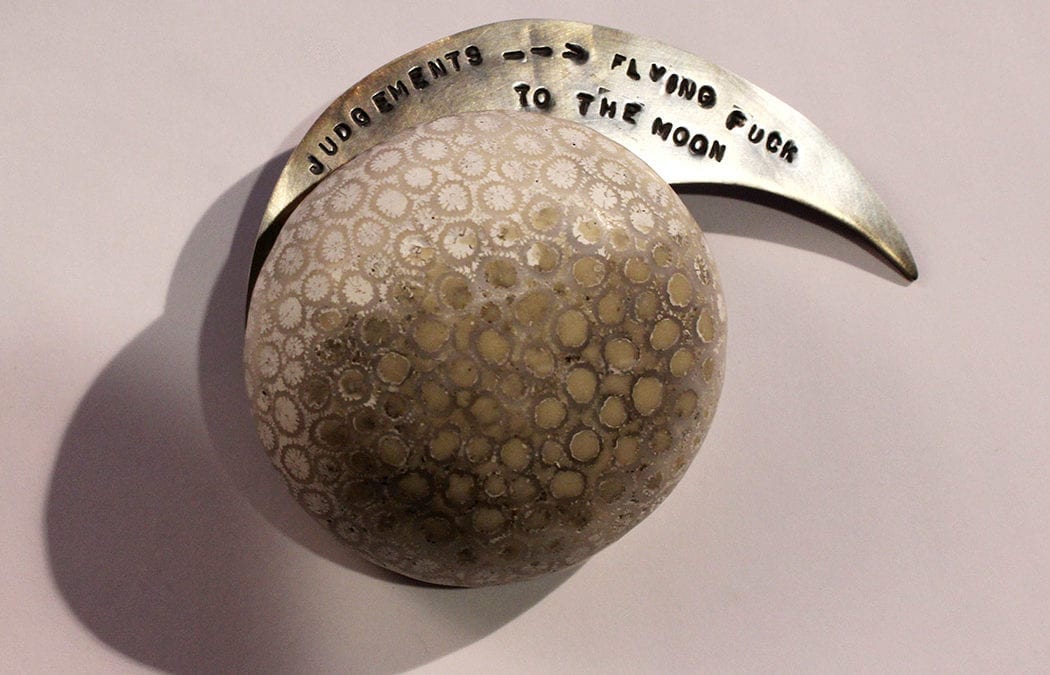 It appears that our mentorship programme is two thirds of the way done and dusted.

I’ve been reflecting on where I’ve come from to where I am now during bouts of insomnia/extreme bursts of mental and physical energy. Everyone has their own private battles and mine is no different.
In the last two years, I’ve walked to the edge and peered over the other side. And made some art jewellery in between.
Personal relationships have shaken me to the core and tested who I was and what I thought I desired; disintegration of dreams, love, sorrow, depression, joy, appreciation.
Also watched loved ones struggle and fall apart, tried to help, felt useless.

Transience; I’ve moved at least four times I think. Our father died suddenly. Family relationships have tested the very definitions of trust, betrayal, GREED, abuse of power, hope, frustration, loss, hurt, ANGER. We walked bewilderedly into the lion’s den and had acrylic talons and artificially whitened teeth bared at us through brightly coloured lipstick during the most vulnerable time possible (another story). My resolve was strengthened to not let experiencing certain behavior and situations define me or adjust my own standards of humility.

I contemplated burning an effigy of my family name. Decided against it at this point. May still do it, don’t want to upset the ancestors though.
I sent my car to the wreckers in an act of revenge on that repeatedly breaking down piece of crap. It was a brief but victorious moment.

I was gifted a trip to a magical island in the middle of the Atlantic Ocean. I crashed a scooter there, found out I wasn’t the speed demon on two wheels that I used to be. The worst thing was snapping the key on my knee. Hobbled about nursing my bruises for a few days, no worries. The scooter’s forks did not make it.
Imagined new dreams. Found renewed wonderment and inspiration.

Ran up the Philadelphia Art Museum steps like Rocky (several times) and jumped around like a fool at the top (vid. to come). Saw some AMAZING art too.

Work situations; too many hours, frustration, boredom, struggled to pay the bills, finding meaning in what situations I could create for myself. Projecting energy. Inspiration. Health.

Put on a brave face while internally screaming What The F************k. Keeping calm. Being kind. Trying to feel empathy in everything. Sometimes failing. Crying in the car driving home from places (but not lately, lately it’s singing). Cultivating lightness. Stressing out. Transforming energy. Experiencing personal FREEDOMS. Found my sense of humor again.

Had my work criticised, praised by others, wondered what I was doing. Had moments of clarity. Wished I was making something different. Felt fragile. And overwhelmed. Persevered. Got stuck in a psychological rut. Still pushing on through but I feel like I am returning to my roots again and making things that bring me happiness rather than fulfilling perceived expectations.

Life is messy and sometimes we get dirty. There is no perfect life or time to create, we just ebb and flow and roll with the punches. Buddhist teacher Pema Chodron says things “…come together and fall apart. Then they come together and fall apart again. The healing comes from letting there be room for all of this to happen…”
It’s no coincidence the theme of my first HS project evolved into Repair Cultivates Care. We are all trying to bandage over wounds at some point and lovingly knit ourselves back together again. Even though it is said we are already whole.

While all of these thoughts and emotions were spiraling around like a tornado I tried hard to find the calm in the centre, and associate meaningful themes to my work so that I can understand aspects of myself in all of the above more clearly. The physical objects that manifest from my hands are the bridge between these inner and outer worlds, they hold energy and catalyse the thoughts and emotions outwards so that I don’t have to internalise them any longer.

And I’m not sorry for any of it.

Writing is cathartic so thank you for baring with.