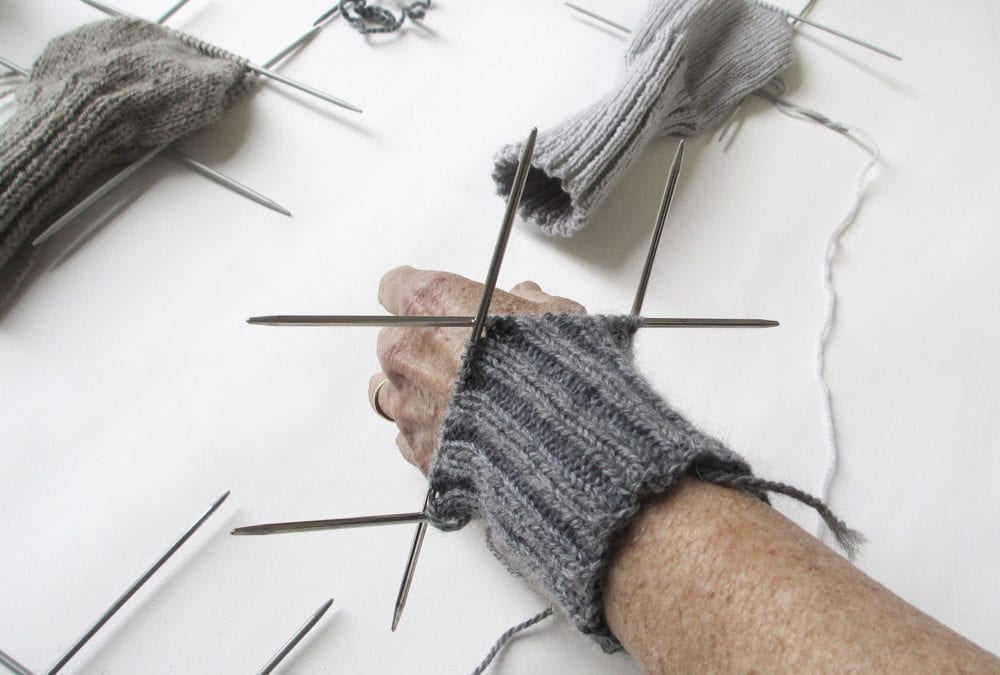 Social history has provided me with a rich source of ideas and material for making work.  The rapid changes in the way we live our lives are a part of human progress, but the speed with which we embrace changing fashions and technologies sometimes comes at the cost of unexpected consequence.  One reads about the extinctions of plants and animals and the frightening impact that has on the environment, but I wonder if some of the ‘time-saving’ shortcuts/devices that replace the family and community activities are similarly important, if not just the memory of them and their place in society.  There are those working within various parts of the ‘slow’ movement who seem to recognise this loss and try to encourage appreciation of the mindful taking of time to make and grow and preserve not only traditions and things, but relationships and communities. 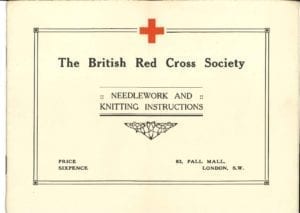 So – I’ve been knitting (painting has been taking place in the studio, but at home – knitting).  I’ve never really enjoyed knitting, from early on I found it tedious and I could never seem to find the easy, deft rhythm I saw in others.  One person in particular left me in awe at her skill – my mother-in-law, Bessie.  She crafted beautiful baby clothes for all her grandchildren and had knitted endless jumpers (and socks) for her family.  But the thing that really impressed me was the effortless way she knitted socks, sitting in front of the TV, no pattern in sight, her needles would fly and the straight tube of knitting would miraculously turn a perfect right-angle heel and taper into a beautiful finished toe.

Bessie’s brother fought in the Second World War, and with the huge need for public help in providing clothing (especially socks), I’m sure she would have been a committed contributor.  Trench foot was one of the main causes of disability in both wars and the response by women, men and even children to knit for their soldiers was astounding. One site (https://theconversation.com/one-million-pairs-of-socks-knitting-for-victory-in-the-first-world-war-30149) states that more than 1.3 million pairs of socks were sent from Australia to soldiers during the First World War and because there weren’t enough needles that bicycle spokes were used as substitutes.  This support was repeated in countries across the world in both wars (https://www.historylink.org/File/5722).  I believe Bessie’s skill would have been developed knitting for her beloved brother fighting so far from his home and family.

I had quite early on made a connection in my mind with the 4 double pointed needles used to knit socks and the grid formation of the Lam de Wolf wall work CODA assigned me to respond to.  I began to look for sets of needles and remnants of wool in the charity shops I visit for inspiration/materials.  The first part of the research I did to contextualise this work was to look at the part knitting played in the World Wars and importantly came across the pattern supplied to the public for knitting for soldiers.  This is the main pattern I have been using.  Although I began knitting some time ago, I’ve needed to keep this work quiet as I early on realised I would need to accumulate a number of pieces before I could work out if I was comfortable with the relationship between what I was doing and the Lam de Wolf work.  I feel that now I have enough to feel that issue is resolved and I just need to keep adding to the series. 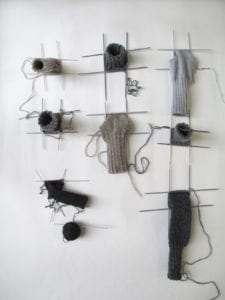