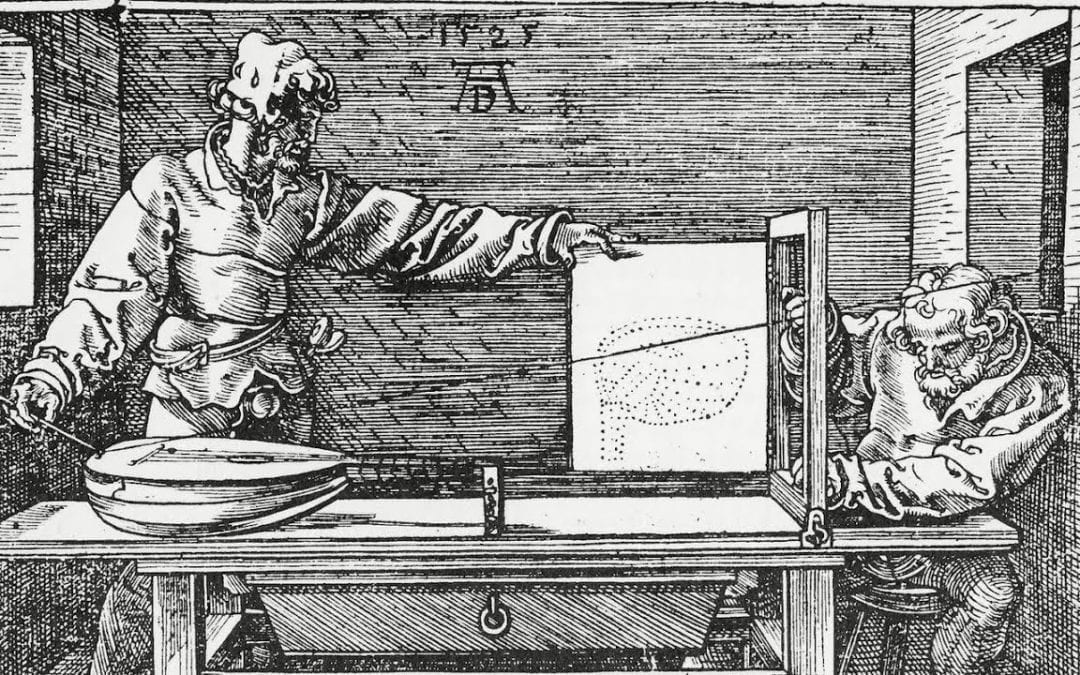 Artists using order and repetition often create works that result in large arrangements that can seem obsessive and even claustrophobic.  Lam de Wolf use of splashes of paint and the fraying of torn fabric offer the opportunity for disorder to invade the rigidity of the grid and subvert the ascetic tendency often apparent in minimalist work so often based on the grid.  The organic and gestural qualities of the application of the paint and the wrapping, draping and unravelling of the fabric all speak of a playful enjoyment of these qualities.

The grid is usually associated with Modernism and Minimalism, but it is interesting to look back a bit further into historical usage, in particular the revolution the use of the grid created in Renaissance painting.  Artists including Masaccio and Donatello began to use the ancient ideas of optical geometry to develop a technique for representing the world using perspective.  This new way of picturing ‘reality’ led to a glorious blossoming of cultural development. Watching contemporary UK painting programmes, I’ve noted how many of the artists take images of what they are going to paint on an Ipad, which automatically grids the image, and this is the main source of information they seem to use in creating their work.  This use of technology as the scource of interpretation harks back to the structure used in the renaissance and illustrated by Dürer (Draughtsmen with Lute, 1525) which I’ve used for my opening image .  So once again the Lam de Wolf’s grid has been the basis of a new, rather large experiment.

I’ve been painting for the first time in a decade, but I’m reversing the process and using the grid to impose order on a painting that without this mechanism would be out of control.  I should have stated up front that I’m not a painter (despite having wanted to be one since childhood).  The painting I’m doing is on quite a large scale – here I wanted to make some reference to Lam de Wolf’s wall work –  mine is 1.5 m x 1 m.  The grid is 7 cm x 7 cm and I’m copying a photograph from an old book of images of New Zealand (which has also been gridded).  The discipline to work carefully and as accurately as I can is a real exercise in order and tries my patience as I just want to get the thing finished.  Initially I was going to cut the painting up into the flapping grid that I experimented with and photographed for the second blog, but increasingly I like the idea of working on both sides of the canvas – the scene from New Zealand on one side and a view of Zeeland on the other.  I like the idea of connecting the work to the two places and the history that ties them together.  As I paint and lose the pencilled grid, I keep re-drawing it – it is quite comforting. 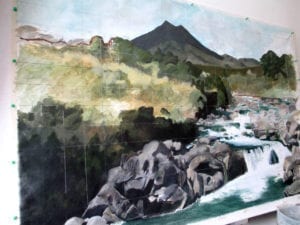