The Jewellers Guild of Greater Sandringham, Drinking about jewellery

In Overview 26 you can find an article about how the HANDSHAKE project has progressed. 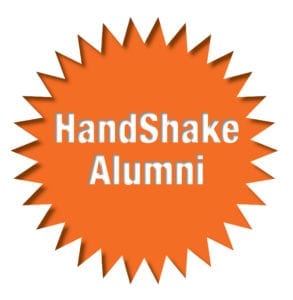 Download SPECIALS: a photo collage of the HandShake Alumni Munich exhibition at the Einsäulensaal in the Munich Residenz Palace.

Standing Room Only for Sunday 13 September 2015

For almost two years 11 emerging New Zealand contemporary jewellers have been mentored by big names international names in jewellery. Now the work of mentors and mentees is being shown side by side for the first time. The Handshake project paired the Kiwi jewellers with their heros at the start of last year. They’ve collaborated using online video and email. So how did it work? Mentor David Neale from Melbourne in Australia, and to Hastings jeweller Vanessa Arthur talks about their collaboration. Mentors & Mentees, is on at AVID Gallery in Wellington.

Jewellery across the miles

Peter Deckers is a spark plug. He has started up many conferences, organized exchanges and exhibitions, and generally speaking whipped up activities to encourage and develop the New Zealand jewelry scene. In his show ‘Deflating Standard’ at Avid Gallery, he also has created jewelry that questions value and the status quo. It is passionate work.

Click here: to read more about the philosophy behind his diverse work practice

Click here for a full report on the pioneering journey of developing ‘leaders beyond dependency’.

Gut instinct, intuition, and accessing the belly of creativity may sound a bit abstract, but according to Dutch contemporary jeweller Ruudt Peters it is here that the creative process begins. He has been paired up to mentor Wellington-based jeweller, Amelia Pascoe as part of Hand Shake Two, an online mentorship programme where selected mentees can develop their practice. So how does the online process work, and how valuable is mentorship in the development of our emerging artists? Sonia Sly investigates. Listen to that radio interview with Peter Deckers, Amelia Pascoe and her mentor Ruudt Peters!

Mentoring is a two way street, and in the case of online mentorship programme – Handshake 2, which supports the development of our most talented contemporary jewellers, it is the mentor who must work for the mentee to help them to develop their ideas.

Netherlands-based Ruudt Peters is a man who continues to defy conventional thinking in his approach to art, object and contemporary jewellery— as a pioneer in his art form he would rather sit on the periphery and stay true to his own voice, rather than conform to tradition.  In-keeping with his practice, when it comes to teaching, he leads his students through meditation and blind drawing to bring out an inner core and authenticity that is unique to the maker. For him, it’s not about making an object for the sake of beauty.

I hate beautiful…for me, jewellery is much more [it is] the content, the emotion, the way you wear it. You as a maker load the piece up, and the wearer loads the piece again. So you have a double loaded object.

Ruudt’s creative process and teaching methods are highly sought-after and have found their way into the heart of Wellington-based Amelia Pascoe whose own work straddles sculpture, object and adornment.

Pascoe has a Masters in Zoology and although she has made a departure from her previous work in biosecurity,  it has provided a great deal of inspiration in her jewellery practice. One project completed though Whitireia Polytechnic’s Jewellery Design course, involved a series of pieces based on desire and trapping, where she likens the devices used to contain or constrain an animal – loops around the necks and pins that pierce the body, to the way in which we attach jewellery. The jewellery and objects that evolved from the project were ambiguous in form, with some containing an element of danger: “…a trap has to meet both the needs or desires of the  trapper, but also the needs and desires of the thing you want to attract.”

Pascoe is hoping to gain much more freedom in her practice, and being mentored by a uniquely acclaimed international practitioner such as Ruudt Peters was as obvious choice. “I come from a science background and I know that I can get quite brain-heavy [so] the idea of working with someone who could help me develop other aspects of my work was quite appealing.”

Handshake2 is the brainchild of contemporary jeweller and educator Peter Deckers. It is an online mentorship programme which has been funded by Creative New Zealand. As part of the process a series of exhibitions will take place, showcasing the outcome of the mentor-mentee development.

The art jewelry community is a tight knit group. So why not make it even smaller?…..      read more: http://galleryloupe.com/blog/?p=1028 (includes photos of the collaboration work from Andrea Wagner and Lyndsay Raine)

June 2013: Short Video about the HS project: for 'pledge me' 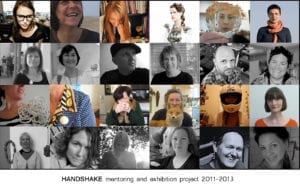 you can hear a report on the collaboration project on RadioNZ: Arts on Sunday.  with interviews of Sharon Fitness and Lisa Walker

You can read about the Handshake Project pre and post Munich in these issues of Overview: snakeview#11-FEB13 and overview-12 APR2013 thanks to The Jewellers Guild of Greater Sandringham.

Kiwi jeweller hand in hand with her hero: news wire

Interview with jeweller Jessica Winchcombe about HANDSHAKE 1 exhibition in Sydney