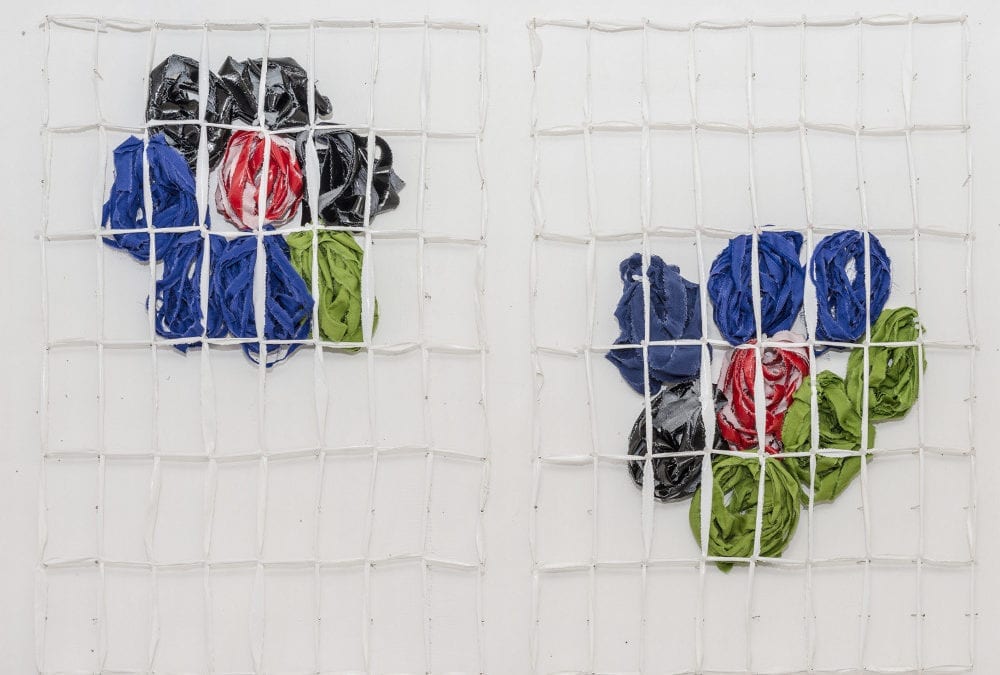 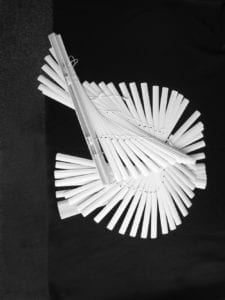 Of course, Lam de Wolf is the first starting point – looking at the broader scope of her work and noting that much of it is closer to contemporary textile art was a definite factor in her appeal, that and the fact that she was one of the artists under the theme of ‘Relation to the Body’.  The body, its relationship to other bodies, objects and social history have been frequent stimulus for much of my work. The featured image is de Wolf’s Fiori Pittorescamentti (detail) from 2015-16.  This is not one of the works assigned to me by CODA, but serves as a useful example.

The grid appears in many of de Wolf’s work – I associate this with a modernist/structuralist position.  Rosalind Krauss writes about the place of the grid as a fundamental trope of modernism:

… ….There are two ways in which the grid functions to declare the modernity of modern art.  One is spatial; the other is temporal.  In the spatial sense the grid states the autonomy of the realm of art.  Flattened, geometricized, ordered, it is the antinatural, antimimetic, antireal.  It is what art look like when it turns its back on nature.  In the flatness that results from its coordinates, the grid is the means of crowding out the dimensions of the real and replacing them with the lateral spread of a single surface……

….In the temporal dimension, the grid is an emblem of modernity by being just that:  the form that is ubiquitous in the art of our century, while appearing nowhere, nowhere at all, in the art of the last one.  In that great chain of reactions by which modernism was born out of the efforts of the nineteenth century, one final shift resulted in breaking the chain.  By ‘discovering’ the grid, cubism, de Stijl, Mondrian, Malevich…landed in a place that was out of reach of everything that went before.  Which is to say, they landed in the present, and everything else was declared to be the past.

The grid can seem to shut out emotions, but the freedom and gestural way in which de Wolf incorporates materials into and onto the grid has an engaging and subversive attitude that I love. That the grid also invites repetition is also attraction – the work of artists such as:

illustrate that the grid on mass can be deeply engaging on many levels. For my own response to being faced with a grid please have a look at my HandShake 4 blog entry: https://www.handshakeproject.com/and-another-thing/

Necklace made from venetian blind component

The next move was to look at words – de Wolf uses words in her work and that is one aspect that I thought important to investigate through Google translator:

These are all useful in thinking of potential aspects to play with.

Google also provided the translation of the CODA provided information accompanied the images of the works I’m to respond to:

A necklace consisting of a long cord that is bundled with eight brushes of strips of painted textile in the main colours of blue and green.

I’m intrigued by the ‘brushes’ of strips. The relationship of the word brushes to the action of the painting of the strips of fabric has the feeling of a pun, or perhaps it is just the slippage inherent in the translation mechanism.

Intent:  Having played with the torn strips of fabric in the workshop, that are completely derivative of de Wolf’s work, I’m starting to move into other materials, some that I have used in the past such as the venetian blind and others that will be completely new.  The main point will be to investigate ways of working with the grid and various materials especially those related to textiles and paint/colour. 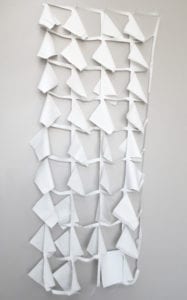 Timeline: The plan is to just keep working through the experimental phase and any discovery that seems promising, to work on producing a small resolved piece that allows for critical feelback.

Research Pitch:  I believe this is covered in the body of the above blog.