Home / The Language of Things

The Language of Things 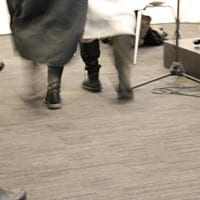 Arrived back from Sydney and got stuck into some gold-leafing for a show some members of Occupation: Artist are putting on for No Filter.  The group decided to support the Dowse who are putting on a fantastic Symposium on April 12-13th.  We put a call out across NZ and Australia for people coming to the Symposium to consider putting on a pop-up show somewhere around Wellington to create a real buzz of excitement and have plenty for visitors to see around the theme of contemporary jewellery.  Our brilliant in-house graphic designer Becky Bliss has designed a map and we have 14 new shows plus most of the regular galleries like Avid and Bowen are showing jewellery themed shows too.  Our little show in the window of The Workshop Framers was called Midas Touch – hence all kinds of things were turned to gold. It seemed to work quite well and the map was popular and there were plenty of images on Instagram.  The Dowse promoted the map and acknowledged our support which was very kind. 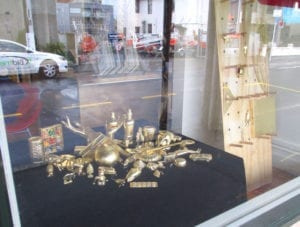 Midas Touch (when oh when will someone invent non-reflective glass?)

Roseanne Bartley one of the speakers at the Symposium used her slot to conduct three interviews about Participatory projects.  She asked me to be one of the interviewees to discuss my Radiant Pavilion project Walking to Ballarat. We walked while talking to suggest the activity I had undertaken and it seemed to help people to connect to something they could only imagine. The featured image for this blog is one taken by the Dowse photographer of Roseanne and me walking. Sharon Fitness spoke about her project in the Dowse show and Spring Rees spoke about Yuka Oyama’s project.

I enjoyed listening to Otto Kunzli talking about his long history in the contemporary jewellery world and Renee Bevan spoke about her journey to the making of a necklace for her Blumhardt Residency.  She is a very thoughtful maker whose work often explores or rather creates dilemmas of conscience/spirituality.  That she does not make clear her position, but rather leaves it hanging in the air, I found really compelling, but some were frustrated and wanted to make her disclose her position – somehow missing the point rather?

Some of the other speakers delivered addresses with passion or eloquence, some subjects roused robust discussion during the breaks and even some days after.  We feel very lucky in Wellington to have such active and supportive people who have the vision (and endurance) to put the work into developing these kind of events where we can talk about and hear about the diversity of practices and meet and get to know more of this creative community.