Home / And another thing…. 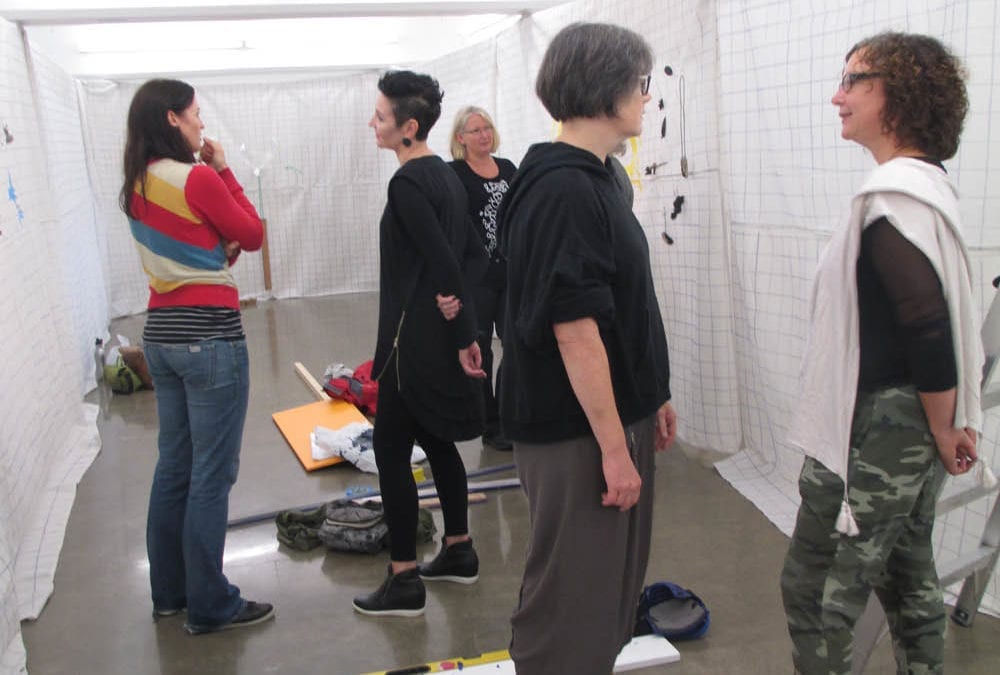 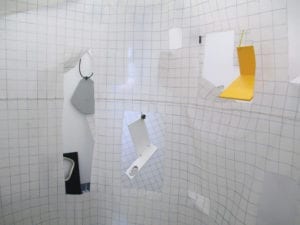 Last week was busy with the installation of the show at Toi Poneke in Wellington. Gabby O’Connor played a large part in directing the alterations or perhaps interventions made to the gallery.  We each ended up with a large painters dropsheet hung on wire (about 3 meters long).  We spent a couple of days ruling a blue grid on the fabric before it was hung up – initially the effect was a bit claustrophobic – but the expectation was that we would each work to create an interesting relationship between the cloth and our work.  My cloth went around a corner and I struggled with how to use so much space for 8 small brooches.  I had made 4 larger experimental works that were not to my mind fully resolved.  They were intended to go on the end wall of the gallery in a mish-mash collection of bits from all of us.  In the end I felt they needed to be scattered in among the smaller pieces.

The flat wall and grid pattern worked quite well with the graphic coloured brooches but it seemed really tame to just have them sitting on the flat fabric and so on Wednesday morning I began cutting into the cloth along the grid lines and pulling it back to the hidden gallery wall where I used double-sided tape to secure it – the brooches were placed on the fabric in these ‘niches’.  I alternated the cut strips with windows where the larger pieces were suspended.  By the end of the day there was a complex space of cloth strips intersecting the space between the hanging fabric and original gallery wall and many of the pieces could only be seen by bending or changing angle to see into this partially hidden space.

Much of Friday was spent working on the Park(ing) Day space – a mixture of cold southerly wind, rain showers and sunny spells it turned out to be a really successful day and the passing audience was quickly engaged with the sight of over 2000 toy cars parked in the space. 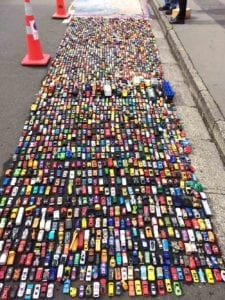 On to the weekend and we spent Saturday, Sunday and Monday working our way through a series of making exercises designed to be used when we get one of those mental blockages that can often happen after an intense period of work and a show.

I especially enjoyed working with the plastacene and the box of discarded toys.  Once the period of making was over we did the exercise Karl Fritsch had done at another masterclass.  Each person has just one minute to select a piece from each maker and then ‘curate’ a show on a tabletop.  A lot of fun and as had happened in Karl’s class some really interesting choices and arrangements.  So much so that we began to think if this might be a strategy we could use for our next show at Corbans.

In mid-April the Dowse is having a Symposium examining various aspects of interpreting/understanding jewellery in the wider field.  Occupation: Artist is encouraging visitors and locals to get involved and put on plenty of activities/shows to activate the city.  We’ve had a few groups confirm but to pad out the offerings we will do our own show too as well as contributing work to another show being organised by Nik Hanton.  I’ve been invited by Roseanne Bartley to be part of a panel she will interview at the Symposium, it means brushing up on some theory, doing some writing and quite a bit of thinking to be properly prepared.

That other thing – Peter has given us the stunning news that a student (Renee Pearson – a really gifted maker and stone-carver) has won the big Talente prize in Munich – just magic!