Home / Back to the grindstone…

Back to the grindstone… 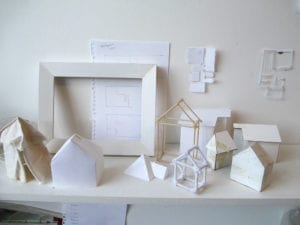 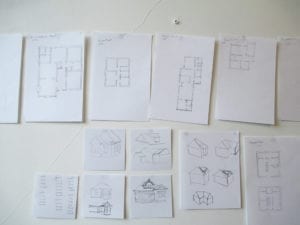 Some of the unresolved experiments and ideas

Literally – I’m really needing to use the space between the end of the last HandShake show and the next to get on with some work long delayed by the frenetic activity of the first half of the year.  It involves a great deal of cutting, grinding and drilling glass, so indeed back to the grindstone.

I’ve also been mulling over the work for the next HandShake show, and my desk is full of all kinds of materials and ideas, mock-ups and drawings that derive from a Manon van Kouswijk workshop I did a few years ago at Whitereia.   Manon’s proposal was for each of us to make work based on what you would take with you if you had five minutes before you had to leave home forever.  As I began thinking through this idea I realised that I could make work that was close to one of the key interests that has been behind much of my work over the last 15 years.  It became about the possibility of condensing down the concept of home into a wearable object, so in essence you didn’t really leave home, you took it with you.  I’ve had the proto-types sitting (hanging) around the studio ever. Since designing and constructing the shelf-like plinths for the Pah Homestead show and then re-using these left-over wooden planks for the Toi Poneke show, notions of construction and domestic architecture were very much on my mind. Whenever I look out of my window I’m confronted by the day to day building of several high-rise apartment blocks in the next street and I guess that has also seeping into the way I’m thinking of making. It seems a perfect time to take the process to the next level.

The show is to be held at Corban Estate Art Centre, an early vineyard (begun in 1902) where they use the old homestead (completed in 1924 and the featured image for this entry) as a gallery – I like that the direction of my explorations ties to becoming, not necessarily site specific, but alluding to the original use of the building.  The title of the show, Polarities, initially came from a reference to the two rooms the exhibition will occupy – one light and the other quite dark.  I am thinking of ways in which my work can also explore these ideas of  the binary.